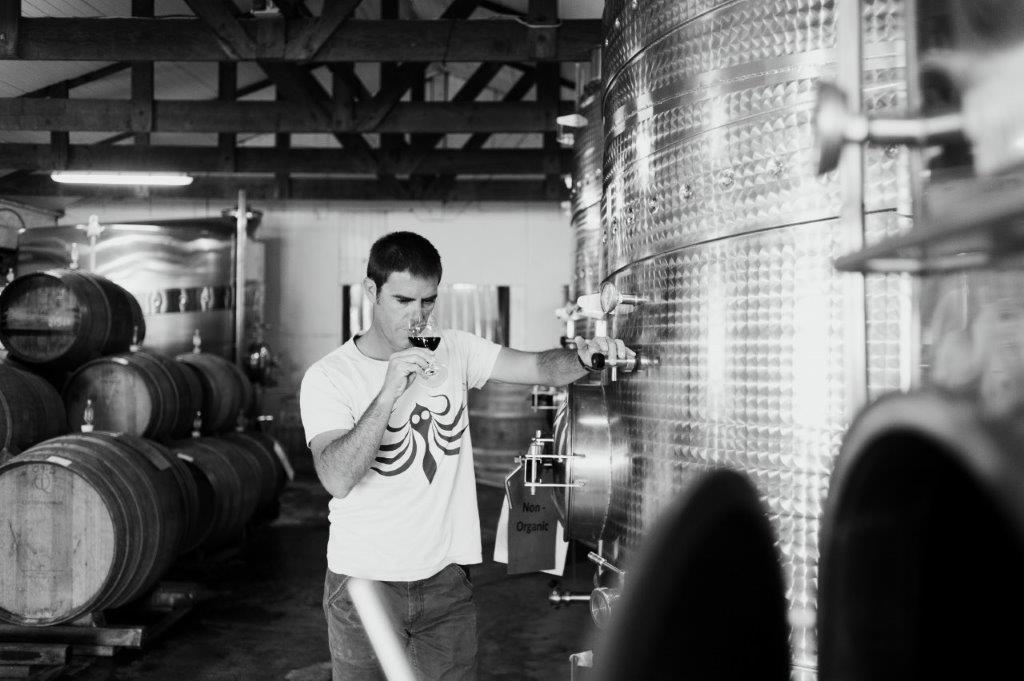 Organic winemaker Tyrrel Myburgh is the avant garde and experimental winemaker behind Joostenberg Wines and one half of Myburgh Bros. His approach to winemaking, and in particular the science and art behind organic wines, is one inspired by his philosophy to leave the earth in a better state than we found it. We caught up with Tyrrel to dig deeper into the processes of organic wine farming and what it actually means.

Organic wine is produced from organically grown grapes and meets the standard for certification by a recognised organic certification agency. Standards often differ from one country to the next, but all organic wines are produced without the use of chemical pesticides or fertilisers.

Before going organic, Tyrrel tells us, both farms produced in the conventional way (their vines date back to 1982, in particular the old vines used for their Die Agteros Chenin Blanc); but soon he noticed the chemicals they were using were detrimental to the environment. The fertilizers, pesticides and herbicides were affecting the plants, causing salinity issues in the soil that left it dead and hard, and killing most of the micro fauna and fungi in that area. And so he made the (by no means small) decision to “leave the farm in a better condition than what it was when he started” and started to slowly convert to organic farming on Joostenberg. (Myburgh Bros. have a similar winemaking style but are not organically certified.)

At Joostenberg, because the grapes are organically grown and the wine is organically certified, it means that there are particular processes which need to be followed. In essence the organic process is a lot more natural so an intense focus is placed on the health of the soil.

“Instead of using chemical fertilizers and other harmful products which could potentially be absorbed by the vines, we use compost and cover crops which we plough into the ground for green compost so that the vines end up having more immunity against diseases and pests” Tyrrel explains.

“So with the filtration process for example, in conventional winemaking you are able to remove a bit of alcohol from it, whereas in the organic process this is seen as a manipulation of the wine and is not allowed. Also during fermentation, for conventional wines you are allowed to add nitrogen in the form of an ammonia-based product, which feeds the yeast and makes fermentation stronger; organically this would be unacceptable,” he continues.

“Organics is a tool that helps you to preserve the link between the soil and the end product – the glass which you put in your hand. Essentially, the greatest beauty about the wine is the link it has to the soil.”

But are you able to differentiate in the taste?

“Since the conversion to organics,” says Tyrrel, “I have noticed that our grapes are a lot more acidic and have a somewhat fresher taste. Also, the sulphur levels in the finished wine is lower than conventional wine, so it would be a great advantage for someone who is sensitive to sulphur” he adds.

We know that in Europe, West Europe and North America consumers are demanding more food and wine made organically and in an environmentally sustainable and mindful way. However, in South Africa that demand is less than 1%. This leads us to wonder: Is organic wine farming practical for larger wine companies?

“We have great weather conditions in South Africa for organic farming,” Tyrrel explains.

“There is less rain and less humidity, which makes it easier than in most parts but there is no quick-fix solutions to problems. For example, in conventional winemaking, if a disease were to break out farmers are able to call the local rep who can easily suggest a product that will help keep the disease under control. In organic farming you have to treat everything in a long-term way to build immunity of the plant so that it would be less susceptible to such outbreaks. I usually get advice from neighbours and fellow organic farmers and eventually find a solution” Tyrrel says.

Maybe your job pays really well, but you don’t necessarily feel good about the work you do. Perhaps your job makes the world a better place, but your paycheck doesn’t satisfy. We asked Tyrrel what the most rewarding part about his job is – apart from the amazing wine of course! – and this is what he had to say:

“For me, the most rewarding part of it all would have to be seeing amazing improvements in the soil and the environment on the farm itself.”

“I see a lot more bird life, insects and small mammals. When we started the conversion process we would have problems with insects like the snout-nosed beetle eating away at the plants. This caused a lot of issues as we could not spray anything or use any kind of chemicals. But overtime we see a lot more diversity competing against each other, instead of the vineyards, which is a great plus!”

Developing a natural ecosystem perhaps? Hmmm, we think you might be onto something Tyrrel!

To hear more from Tyrrel Myburgh, take a listen to this recent podcast with Amanda Visser. And if you are in the Western Cape, visit their farm at Joostenberg. We highly recommend their Slow Sunday lunches at The Kraal, which are a great opportunity to see the farm for yourself, meet the winemaker and, of course, try their fantastic wines!